I don’t tend to say much about the work of other authors on this site, which is decidedly remiss of me and something that’s long overdue for correction. (Partly it’s because I’m always a little ashamed of how few books I actually read, though I gather this is a common refrain among authors because, y’know, we’re busy writing books of our own.) So here’s a quick rundown of some of my favourite crime/thriller reads from the last 2–3 years.

Note that this is by no means an exhaustive list. A particular book not appearing doesn’t mean I didn’t like it — it just (usually) means I haven’t read it! With all that said… 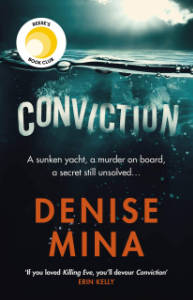 I think it’s fair to say that my own writing wears the influence of Denise Mina on its sleeve. Reading the Garnethill and Paddy Meehan trilogies in the mid-00s opened my mind as to what Scottish crime fiction could be — no middle-aged divorced alcoholic maverick male detectives in sight here, or at least not as the heroes! Conviction, the tale of a true crime podcast addict on the run from her past, almost feels like five or six different books in one, straddling a multitude of different genres and constantly pulling the rug out from under the reader’s feet. I think this might be my favourite of her books since The Last Breath. One of my best reads of 2019! 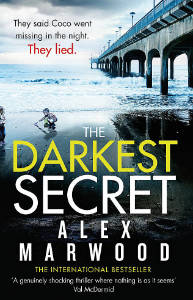 Alex Marwood’s debut novel, The Wicked Girls, had one of the most intriguing blurbs I’ve ever read: “On a fateful summer morning in 1986, two eleven-year-old girls meet for the first time. By the end of the day, they will both be charged with murder.” The Darkest Secret, her third novel, manages to be every bit as compelling in a “ripped-from-the-headlines” sense. A three-year-old girl goes missing during a get-together involving many of the great-and-not-so-good of high society, sparking a media frenzy and years of recriminations. Straddling two timelines, this is part “lifestyles of the rich and sleazy” exposé, part gripping whodunit, with more than a passing resemblance to the circumstances surrounding the tragic and mysterious disappearance of Madeleine McCann. Highly recommended! 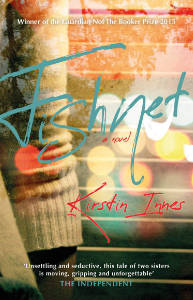 Fiona’s sister Rona vanished without a trace, leaving Fiona to care for her baby. Years later, Fiona finds out that Rona had been working as a prostitute prior to her disappearance — a revelation which turns her safe, ordered existence upside down. Desperate to find out what happened to Rona, Fiona immerses herself in the world of sex work and, in the process, develops both a respect for the women who inhabit it and an attraction to the power many of them wield over both their clients and their own lives. Kirstin Innes’ debut novel is not necessarily an “easy” read, as it goes to some dark places and challenges a number of widely-held preconceptions about the sex work industry — chiefly the notion that they’re all poor, pathetic victims who need to be saved. Innes has clearly researched her subject matter thoroughly, and the result is a compelling, informative and thought-provoking novel that avoids the common tropes associated with the “dead hooker” subgenre of crime fiction. One of my absolute favourite reads of the last couple of years, recently republished after being out of print for a couple of years (the original publisher, Freight Books, sadly folded) — so there’s no excuse not to pick up a copy. 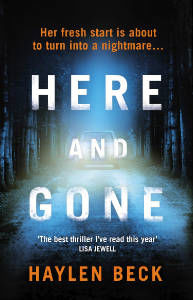 I don’t, as a rule, tend to read too many suspense novels in this mould, but Here and Gone grabbed me from page one and didn’t let go for the entirety of its 300-odd pages. A desperate situation turns steadily worse as a mother, fleeing an abusive husband with her two children in tow, is pulled over on an isolated road by a local sheriff on a minor traffic violation and taken into custody, only for her children to disappear without a trace and for the sheriff to claim that she never had any. I absolutely raced through this book — something I rarely do under normal circumstances — and am eagerly anticipating both Haylen Beck’s next book, Lost You, and dipping my toes into the crime novels of his alter ego Stuart Neville (his real name). 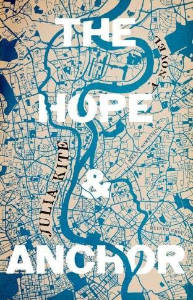 The Hope and Anchor
Julia Kite

Though I enjoy a good detective yarn, I naturally find myself gravitating more towards stories about everyday people experiencing decidedly non-everyday situations. This novel encompasses two viewpoint characters: Neely, who returns home to find that her girlfriend Angela has gone missing without taking her epilepsy medication, and Angela, recounting the events which led up to her disappearance. While arguably not strictly speaking a crime novel in its purest sense, it nonetheless contains many of the classic elements — not least a missing person — in slightly different guises. Arguably its greatest strength, apart from the way it beautifully captures the idiosyncracies and foibles of these two very different women, is the vivid way in which it depicts the city of London and all its hidden nooks and crannies. I loved this book and can’t recommend it highly enough. 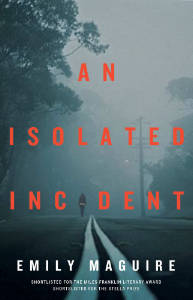 Somewhat to my chagrin, this is the first Australian crime novel I’ve ever read (unless you count Helen FitzGerald — see below — who, though Australian herself, sets most of her books in her adopted home of Scotland), but I ended up choosing a cracker to start with. A young woman is murdered in an isolated town in rural Australia and her older sister, Chris, a barmaid and sometime prostitute, sets out to identify and bring the perpetrators to justice, eventually butting heads with an ambitious young reporter who’s determined to do exactly the same, albeit through different means. Rather like Fishnet (see above), Emily Maguire’s novel subverts a number of the usual “dead hooker” tropes, not least by making it the “good” girl who’s been murdered while placing her sex worker sister in the role of amateur detective. Along the way, she explores the casual bigotry in which the small community is steeped, resulting in a powerful and at times harrowing read. 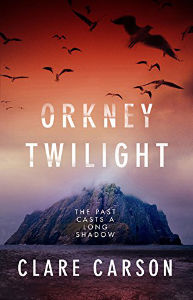 I love a good spy thriller almost as much as my crime mysteries, and this novel, the first in a trilogy focusing on a young woman, Sam Coyle, the daughter of an undercover police officer, combines both to brilliant effect. It’s something of a slow burner, focusing on building mood and Sam’s growing suspicions about her father, but both the Orkney setting and the backdrop of the miners’ strikes in the mid-80s make for a seriously engaging read, and I’m eagerly anticipating getting stuck into the rest of the trilogy. 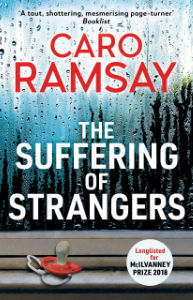 The Suffering of Strangers
Caro Ramsay

I’ve followed Caro Ramsay’s Anderson & Costello series from the very beginning, and this, the ninth instalment, is one of her best. A newborn baby has been stolen from its mother’s car and replaced with another — one with Down’s syndrome. Joint protagonists, Detectives Anderson and Costello, spend much of this novel apart, working within separate teams but gradually coming together as the mystery unfolds. Ramsay taps into a number of meaty subjects, including the rise in demand for “designer babies” in a world where genetic defects can be detected prior to birth and the underground market for surrogate mothers. It all adds up to a twisty and unpredictable mystery which ends on a gripping cliffhanger, leaving you eagerly anticipating the next instalment. 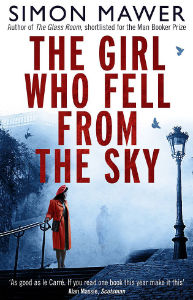 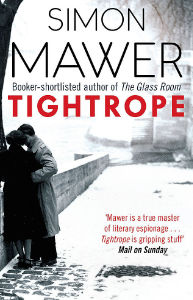 Trapeze (a.k.a. The Girl Who Fell From the Sky)
and Tightrope
Simon Mawer

I’m cheating slightly and counting two books as one here, though they constitute a brilliant diptych and really deserve to be read together. My other love, apart from crime, is Second World War resistance thrillers, and these two novels, focusing on half-French, half-English spy Marian Sutro, proved to be an unexpected delight. The first instalment, Trapeze (I much prefer this title to the longer, Stieg Larsson-inspired variant under which it was re-released), is the more conventional of the two — a rip-roaring wartime yarn set in occupied France, albeit one with considerable depth and attention to characterisation. The sequel, Tightrope, picks up in the aftermath of the war as Marian emerges from the concentration camps and tries to piece her life and identity back together against the backdrop of a new conflict against the Soviet Union and her growing belief that her actions during the war could directly result in nuclear armageddon. Tightrope dives even deeper into “character study” territory than its predecessor, and if the result is perhaps slightly less of a pacy page-turner, it’s no less satisfying a read. 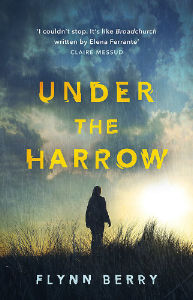 Under the Harrow
Flynn Berry

Under the Harrow is described on its cover as “like Broadchurch written by Elena Ferrante”, but that’s arguably selling it short, for Flynn Berry’s debut novel is its own beast: a vivid and atmospheric mystery told from the point of view of a young woman, Nora, who arrives at her sister’s isolated country house for a pre-arranged dinner date to find her brutally murdered. In classic whodunit fashion, Nora can’t just leave the investigation to the police and takes matters into her own hands, all the while haunted by an event in her and her sister’s past and the long shadow it has cast over both their lives ever since. Berry’s command of prose is exceptional, and, though she’s actually American, she writes England and English people extremely convincingly, resulting in a stunning debut that stuck with me long after I reached the final page. I’m not going to lie: it was the striking cover art that caused me to pick up The Upstairs Room in Waterstones… though it was very much the brilliant writing that kept me hooked from the first page. A modern, housing crisis-era twist on the haunted house genre, The Upstairs Room is told from three different points of view: married couple Eleanor and Richard and their young lodger Zoe. What most impressed me about Murray-Browne’s writing is her ability to subtly twist the knife as her protagonists come to believe that their home is inhabited by a malevolent force, despite the fact that, on the surface, very little is actually happening. The entire book oozes atmosphere and ended up being one of my absolute favourite reads of 2018. 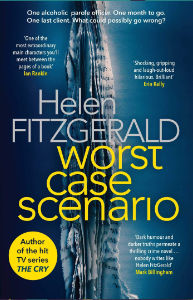 I’ve loved Helen FitzGerald’s writing ever since I randomly grabbed a copy of Bloody Women off a shelf in the library and read that first page. She never fails to make me laugh and shock me in equal measure with her glorious blend of Australian and Glaswegian sensibilities, and her latest novel, about a probation officer going through the menopause, is no exception. FitzGerald has an amazing ability to take a normal, everyday scenario, make it utterly surreal, and then spin it off in a completely insane and unexpected direction, and keeps doing it throughout the entire book. Highly, highly recommended.